From FileZilla Wiki
Jump to navigationJump to search 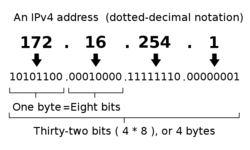 Some address blocks or ranges have been assigned a special meaning.